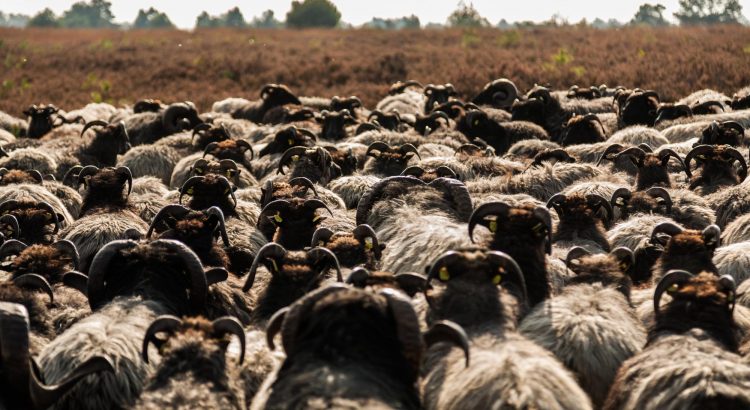 At the beginning of October we start on our second road trip of this year. In just under 2,500 km we will experience northern, eastern and central Germany. The main destination is Leipzig, and this time it is planned as a relaxing holiday. In other words: We have planned every second day to do nothing. At least on the first day this works out perfectly. This time, again, we load up our car with half of our household items, because that way we lack nothing.

For the start we choose the Lüneburger Heide (heath). In October the heath is already withered, but therefore less touristically busy. We spend the night at Camp Reinsehlen, a motel with a fantastic view in an absolutely quiet location. On the first evening we look for a restaurant in Schneverdingen, where we get a dish with Heidschnucken meat. Heidschnucken, this is the name of the sheep grazing on the heath (and whose meat is considered as game meat). We quickly find a restaurant where we both order Heidschnucken ragout. The meat is incredibly tender and the homemade Spätzle (sort of noodles) taste great, all in all a feast for the soul. In the evening we sit outside and read and enjoy the starry sky. A great start to the holiday.

The first day is a planned ” doing nothing” day. We don’t sleep in to catch up on breakfast, which will be the best breakfast buffet of the whole trip, but apart from a little walk we just rest, read and play together. Also on this day we taste both Heidschnucken ragout, this time in the restaurant in Camp Reinsehlen. And again it tastes simply fantastic.

The next day we are on tour with a shepherd and herd Heidschnucken. The, by nature, grumpy man turns out to be very friendly and talkative, tells us all kinds of things and lets us guess facts, like why the Heidschnucken are called Heidschnucken (tip: Schnucken is another word for nibbling). In between the eight bucks around us jump on their ladies all day long, because “that’s what they are there for”. So we herd about 325 sheep, 8 goats and 1 donkey with the help of our three dogs, who are independent in a fascinating way and almost always have the herd under control.

The next destination is the Baltic Sea, more precisely: Zingst on the Darß. But before we get there we stop in Prerow in the Teeschale (tea bowl). It’s a little restaurant with some cake, and an incredible number of teas on the menu. The cute little house also offers a small shop with an equally large selection of teas that can be packed.

When we arrived in Zingst we were overwhelmed by the obvious tourism, which we simply had not expected. We stayed overnight in house 54, a youth hostel. In Zingst the cranes were resting on their journey from the north to the south and we wanted to see if we could see some cranes on their way in during the next days. The nice lady at the bar recommended a tour with a boat. We haven’t even unpacked properly yet, and already we’re on our way to the harbour on foot and choose one of the two boats. The apparently less spectacular looking boat is fortunately much emptier (because it looks less spectacular), and we look for a table in the front.

The tour starts and the captain tells us some more or less interesting anecdotes and explains to us that sometimes the cranes come in rather later, as we don’t see any yet. The weather is great, but extremely windy, and after about an hour we see the first chains with cranes. We are happy and think that this is it. But then more and more appear on the horizon, until literally the whole sky is full of cranes flying in very low. There are thousands of them, and not only the sight is spectacular, but also the soundscape of these impressive birds. The captain takes an extra lap and turns the boat again, and we see cranes at sunset and cranes in front of the rising moon. Really impressive. Frozen but happy, we walk home and take a long and hot shower.

The next day is all about the cranes as well, but the weather is very modest. Grey sky and constant drizzle give us the good feeling to have been very lucky yesterday.

In Potsdam we visit friends who are in the process of renovating a house. Considering the basic condition of the house, this is an enormous achievement, to which I take my hat off. So it’s convenient that shortly before we arrive the heating failed and therefore there is no warm water. Instead the water boiler will be our best friend for the next days. For washing dishes as well as for personal hygiene. Two extra blankets unpacked, and we will survive the night well.

The next day, once again a planned day off, we walk through Potsdam and then cover quite a long distance. There are many small and creative shops here, too, which are at least worth a look. Since we did not visit a Viking museum on our road trip through Denmark this spring, we want to make up for it and visit the Viking exhibition in Berlin. Unfortunately, the exhibition turns out to be relatively dull, and because of the poorly placed showcases and boards, which also have far too small fonts, the visitors almost stand on each other’s feet.

After the exhibition, we will take a look at Prenzlauer Berg to see that gentrification is well advanced here. There are many fancy shops and the house facades mostly appear very neat and also expensive. In between there are individual shops with a colourful mixture of the public. The evenings are great throughout, as we have great friends with whom we spend nice evenings, often cooking, but mostly chatting.

In Leipzig we stay in the Motel One at the Nikolai Church, right in the middle of the city. The first thing we do after we have checked in: a long and hot shower. Seems to be our motto of the trip. Why actually Leipzig? There is a simple reason. I started a new hobby at the beginning of the year: I am engaged in genealogy. Yes, it is a hobby of the elderly, but it relaxes me and I enjoy it, and I have already found great new family because of it!

In the state archives in Leipzig you can find the filmed church books of the former Eastern territories, and since a part of my ancestors came from East Prussia, I wanted to follow up on this myself, because the Internet could not help me any more. We registered for Monday and Wednesday, so that we had two days to search for my ancestors. Maraikes ancestors are registered in church registers which unfortunately do not exist here, so that we limited ourselves to two names, of which one name appears only very rarely. On the first day we sit at two reading machines next to each other, opened the laptop, and look through the books at the same time. We first have to get used to the old writing and spelling, which at times is very difficult or even impossible to decipher. We notice several things, such as that every priest (and every time) has a different way of recording the data. And the earlier we go back in time, the less people could read and write. This means that the priest wrote down the names in the dialect they heard. Therefore we find names we are looking for in all possible variations. It is also interesting that in some church registers from earlier centuries, when baptisms were registered in some church registers, the text for children born out of wedlock was written upside down.

The first day passes quickly and it becomes clear that we want to come the next day as well, which is no problem. So we stay at the state archives for three days and research, sometimes on three readers simultaneously, since the left and right pages are on two different rolls, but the data is often written as continuous text over both pages. After Wednesday we entered the data of almost 100 possible relatives in a spreadsheet and printed out the data of 50 probably direct relatives for further analysis.

In the evenings we stroll through the city centre and look at Leipzig by night. Among other things we stop at the Thüringer Hof, a rustic restaurant with almost 600 years of history. Even if we don’t eat anything typically Leipzig, it is at least to some extent regional.

The next day we go to the zoo. We have the feeling that half of the zoo is rebuilt and renewed. The ancient cages for the birds are obviously not affected by this and they remind us of a zoo from two centuries ago. But then we come to the newer enclosures, which are large and beautiful. It is noticeable that every path leads past snack bars and restaurants. We can’t escape this, and in one African part we sit down at a table and dine with a view to giraffes and large running birds. The great apes seem to be used to humans, and they play right in front of the big windows and also interact with the visitors. But the absolute highlight of the Leipzig Zoo is definitely the Gondwanaland. This is a huge tropical house, very well made, and very diverse. All in all, the Leipzig zoo is worth a recommendation. Only the fact that one has to pay extra for many little things as for example a short boat tour is a little annoying.

From here on the journey is of private nature. Via a stopover at friends we drive to Hildesheim to visit more friends. They are also renovating a house, but here the hot water and heating is working. A few days later, once again via a stopover at friends, we go to Kassel to visit my family. There we buy “Ahle Worscht” again. Not liked as a child, now loved, some of these delicacies are always taken from here to Cologne.

Then the journey is already over. And it ends once again with a lot of impressions and the knowledge that you can also spend a nice holiday in this Germany.